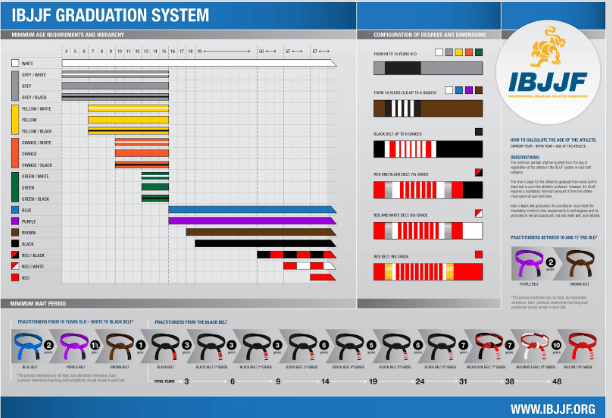 We use belts as milestones of learning and these belts are earned through hard work. The BJJ belt is one the hardest journeys in martial arts respected and revered in the combat sport world. Many compare the purple belt of Brazilian jiu jitsu at the same level as a black belt from other martial arts.

How long does it take to get a BJJ black belt?

It can take anywhere from eight to twelve years to earn your black belt, given that you spend consistent time on the mat, limit any injuries, and closely follow the goals for your development. We will break down some of the key details of belt progression in Brazilian jiu jitsu through this article.

If you view Brazilian jiu jitsu as a language it would look like this: At white belt you learn to create letters; their shapes and sounds. At the green belt you are still learning to form these letters. When you reach your blue belt you have a grasp of chaining together these letters and create some words. During your purple belt you make purposeful words and begin to connect them to form basic sentences. Purple belts begin to have conversations. Once you reach your brown belt these words form sentences. You can discuss and persuade with each sentence. When you reach the black belt in Brazilian jiu jitsu you are writing essays. You can express yourself with sheer confidence. Do not be fooled however the black belt is not the pinnacle of BJJ. There is a higher level once you are a black belt. The beauty of BJJ is the learning never ends. The coral belts are the culmination of 1000’s upon 1000’s of hours on the mats and the most prestigious in the BJJ world. This article will not discuss the coral belts other than their direct relationship to the time spent as a black belt.

What are the BJJ belts?
In the International Brazilian Jiu Jitsu Federation (IBJJF) the belts are White, Blue, Purple, Brown, and Black.

How do BJJ Belts work?

In BJJ the belt progression from white to black takes between 8 and 12 years. There are five belts

White…… Everything is new. A white belt at Dark horse trains from 6 months to a year before you move to the green belt.

Blue………You develop a solid defense and a knowledge of general strategy “Escapist”. Typically you are a blue belt for two years. You may be eligible for your blue belt no earlier than 16 years old

Purple…… You are able to connect positions and attack with combinations of techniques “Guard monster” The purple belt will take you no less than two years.

Brown…….An athlete’s personality becomes evident in creating his own game “Your Game”

As a brown belt you can expect one to two years of training to complete. Minimum

Black……..Completeness. Your game possesses depth and complexity and becomes internalized. “Instinct and Reflection” You find that the learning does not end at the black belt. Each stripe on the black belt is three years of training. The youngest age you are allowed to hold a black belt is 19.

At Dark Horse Jiu Jitsu in Longmont, Colorado, we have also added the green belt, which is placed between white and blue. We view belts as milestones of your progression, not destinations. Each belt is a stepping stone. While achieving your next belt is a great goal to focus on towards the black belt, it is not the end of the journey as you shall discover.  We promote our students based on three criteria:

There are no formal tests for belt progression at Dark Horse. This being said, how do you know where you are in your own journey? Your belt progression is definitely a testament of the milestones you have covered through your journey. What does this mean? How is it determined? We will look at this in some depth here.

Your belt progression is reviewed by the coaches and professors through attendance, active rolling, observation of your technique, and through your goal meetings. Martial arts in Longmont and around the world give an outlet for inner expression and understanding of yourself, exposed while on the mats or in competitions. There is no avoidance of hard work. This is not easy, but nothing easy is worthwhile. When you start your journey you will be awarded a white belt with the completion of the introduction class and your first formal class.